M, b. December 21, 1953, d. April 18, 2005
Dennis Clinton Jennings was buried at Huffville Union Church Cemetery, Terrys Fork, Floyd Co., Virginia.2 His Social Security Number was 225-80-0066.4 He was born on December 21, 1953 at Virginia.1,4,5 He married Patricia Mae "Pat" West, daughter of Byron Wilson West and Mary Magdalene Cunningham, on January 15, 1972 at Christiansburg, Montgomery Co., Virginia.6 Dennis Clinton Jennings and Patricia Mae "Pat" West were divorced on October 20, 1975 at Montgomery Co., Virginia.7 Dennis Clinton Jennings married JoAnn Gearheart, daughter of Willie Wayne Gearheart and Eloise Octavia Martin, on November 15, 1975 at Floyd Co., Virginia.1,2 Dennis Clinton Jennings died on April 18, 2005 at Virginia at age 51.2,4 He Dennis Clinton Jennings, of Pilot, left his earthly home to join the throne of his Heavenly Father on Monday, April 18, 2005 at the age of 51. He is preceded in death by his father, Estel Clinton Jennings. Dennis is survived by his loving, faithful wife of 29 years, Joann Gearheart Jennings; daughter and son-in-law, Jennifer and Mark Linder, Pensacola, Fla; precious granddaughter, Raegan Joy Linder; mother, Hazel W. Jennings, Radford; sister and brother-in-law, Nora Lee and William Saunders, Kill Devil Hills, N.C; niece, Deborah Anne Gragnani; her daughters, Lauren and Paige; nephew, John R. Saunders, his children, Christy and John Richard, all of Richmond. Dennis' extended families are Wayne, Eloise, Jerry, Charlotte, Mark, Tabitha, Angie, Haley, Amanda and Austin. Dennis worked for Wackenhut Corp. at Radford Army Ammunition Plant as Fire Chief from December 1999 to present. He also served as member of the International Fire Chief Association since 1999. He started working for Radford Army Ammunition Plant in 1988. Dennis volunteered his services to Floyd County Fire Department Station #3 as he rose through the ranks serving the Locust Grove community for approximately 27 years. He also served Christiansburg Rescue Squad in the mid 1970's, extending that service to Floyd's Locust Grove Rescue Squad after moving to Pilot in 1978. In his free time, Dennis enjoyed working at Pilot Mountain Grocery, which was purchased by his cousin, the late Ronnie Wimmer, meeting the public gave him joy. Funeral services will be conducted at 11 a.m. on Thursday, April 21, 2005 at St. Paul's United Methodist Church, Main Street, Christiansburg with Dennis' friend the Rev. Neal Turner officiating. Interment will follow in Huffville Cemetery, Pilot. The family will receive friends on Wednesday at Gardner Funeral Home from 5 until 7 p.m. In lieu of flowers, donations may be made to the Floyd County Fire Station #3, 4170 Nectarine Drive, Pilot, Va. 24138. Gardner Funeral Home, Floyd is in charge of the arrangements.
on April 20, 2005.2

M, b. January 17, 1825, d. March 14, 1889
George Smith Conner was buried at Aten Cemetery, Hildago, Crooked Creek Township, Jasper Co., Illinois.6 He was born on January 17, 1825 at Jennings Township, Fayette Co., Indiana.3,2,5 He married Jane Davee, daughter of Benjamin F. Davee and Amanda Shorde, on April 2, 1848 at Shelby Co., Indiana.3,1,4,2,7 George Smith Conner Jasper Co, IL. A note written into the cemetery records states he and Jane arrived this date. in 1855.7 He married Ruminta A. Ballard on October 26, 1876 at Jasper Co., Illinois.4,5 George Smith Conner George S. Conner, son of Daniel and Rebecca (Smith) Conner, was born in Fayette County, Ind., on January 17, 1825. His parents moved to Indiana when it was a territory, in 1812. George attended school some and cleared land, until he was 14 years old, when his father moved to Shelby County, Ind., where he farmed, and where his father died in 1841 and his mother in 1848. On April 2, 1849, he married Jane, daughter of Benjamin Davee, of Shelby County, Ind. To them were born nine children, only one of whom, Alice M., is living. In 1855, he came to Jasper County, Ill., and purchased 120 acres of prairie land, and improved it. His wife dying January 16, 1876, on October 26, 1876, he married for his second wife Ruminta A., daughter of William W. Ballard, of Darke County, Ohio. Four children have been born to them, two of whom, Cora E. and Nellie M. are living. Mr. Conner now owns and occupies a fine farm of 400 acres, and as good a house as there is in the township. He is a general farmer, and deals in stock quite extensively. In politics he is a Republican, and was a true friend to the soldier of the late war. His uncle, John Conner, was a soldier of the Revolution, his grandfather Smith, a minute-man, was killed by the Tories, and his wife's great grandfather, a soldier in the same war. Mr. Conner and wife are both members of the Christian Church, and are very highly esteemed by all who know them. in 1884.7,5 He died on March 14, 1889 at Jasper Co., Illinois, at age 64.3,2

F, b. January 20, 1926, d. December 20, 2005
Her Social Security Number was 051-20-9507.2 Aida Theresa Bosta was born on January 20, 1926 at Brooklyn, New York.1,2,3 She married Owen Wesley Conner, son of William B. "Bill" Conner and Ocie Ella Worrell, on June 27, 1959 at Radford, Virginia.1,4,3 As of June 27, 1959,her married name was Conner.3 Aida Theresa Bosta died on December 20, 2005 at Roanoke, Virginia, at age 79.4,2 She Aida Theresa Conner, 79, of Roanoke, passed away at home Tuesday, December 20, 2005 surrounded by the love and support of her family and friends. She is predeceased by 2 of her 11 children, Patrick Conner and Dennis Gregson. She is survived by her spouse, Owen Wesley and nine children, from Hampton, Va., Diana Bosta and best friend, Carla Young, Susan Mcgee and spouse, Tim, Cyndi Conner and best friend, Steve; from Roanoke, Wesley Conner, David Conner and spouse, Daisy, Peggy Yeakle and spouse, Paul, Wayne Conner, Eric Conner, Elaine Mowbray and spouse, Donnie Mowbray, Jr; grandchildren, Danielle Mowbray, Danielle Towns and spouse, Shane, Anton Bosta, Jessica Reynolds and best friend, Nell, Bobby Reynolds and spouse, Stephanie, David Conner Jr., Damion Kogut and spouse, Kim, Shane Kogut, Timothy Mcgee, Dana Kogut; great-grandchildren, Tyeshia, Tyler and Tyrese Towns, Lauren and Ethan Reynolds, Jonathan, Joshua and Peyton. Aida was an Italian who loved to play bingo. She loved to feed the seagulls and go crabbing in Hampton, Va. She loved to listen to the BEEGEES. She loved to roller skate, bowl and dance. Her favorite color was orange. She had strawberry blonde hair with big beautiful brown eyes and a smile that would light up the room. She never met a stranger and always put the needs of others before her own. Though she will be missed, her spirit will always be in the hearts of all who were fortunate enough to know her. To all she was a best friend, a girlfriend and a mother. The family would like to extend their thanks to Dr. Stavola and all of the other doctors and nurses who took great care of her. A funeral Mass will be held at St. Andrews Catholic Church, Jefferson Street, Roanoke on Friday, December 23 at 3 p.m. with Msg. Tom Miller officiating. Flowers will be received at 5932 Byron Circle Roanoke, Va. 24019. "Never Forget, Never Regret the gift from above Unconditional Love."
on December 22, 2005.4 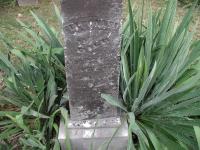