F, b. April 5, 1932, d. January 24, 2017
Betty Jane Hedrick was buried at McKee Cemetery, Gravel Hill Road, Bedford Co., Virginia.1 She was born on April 5, 1932.2 She married Harry Lloyd Wimmer, son of Rev. Frank H. Wimmer and Hassie Nester, on December 16, 1951 at South Carolina.3,1 As of December 16, 1951,her married name was Wimmer. Betty Jane Hedrick died on January 24, 2017 at Salem, Roanoke Co., Virginia, at age 84.1 She Betty Jane Hedrick Wimmer, 84, of Salem, Va., died on Tuesday, January 24, 2017, after a brave battle with cancer. She passed away at her home with family and friends present. Betty is survived by her son, Gary Wimmer and his wife, Kim, and grandson, Carson; and her son, Kevin and his wife, Robin; four sisters; two brothers; and numerous family members and close friends. She was preceded in death by her husband, Harry Wimmer; her daughter, Jill Wimmer; and several beloved family members. We would like to offer our heartfelt gratitude to Gentle Shepherd Hospice for caring for Mom during her battle. A special thanks to her friend, Sharon, for her constant dedication throughout... we are eternally grateful. Thanks also to Kevin and Robin for their love and support. Betty was known to all as an admirable, humble woman who always had a beautiful smile and a giving and loving nature. She was exceptional in her devotion and love for friends and family. The light of her life was her attachment, affection, and shared experiences with her grandson, Carson. They had an emotional bond filled with happiness and joy in every moment they shared together. Betty's beliefs in Jesus Christ and his teachings were steadfast and the way she lived her life set an example for others. While Betty was treasured on earth, she is now one of God's truly special angels in Heaven. We will miss her but will cherish our sweet memories and forever keep her alive in our hearts. Rest in glorious peace our dearly beloved Betty. Visitation hours will be from 2 until 4 p.m. on Saturday, January 28, 2017, at Oakey's North Chapel on Peters Creek Road. A Service will be held at 2 p.m. on Sunday, January 29, 2017, at Oakey's North Chapel with Pastor Hilton Jeffreys officiating. Interment will follow in the McKee Family Cemetery. In lieu of flowers, donations may be made to Bethel Baptist Church or to Gentle Shepherd Hospice. on January 27, 2017.1

F, b. November 20, 1932, d. July 27, 2011
Her Social Security Number was 225-44-4885.8 Lera Sue Wimmer was born on November 20, 1932 at Floyd Co., Virginia.1,9,4,8 As of June 11, 1949,her married name was Kelley.1 She married Alvis Sharon Kelley on June 11, 1949 at Floyd Co., Virginia.1 Lera Sue Wimmer and Alvis Sharon Kelley were divorced on March 5, 1971 at Roanoke, Virginia.9 As of July 7, 1973,her married name was Kidd.7 Lera Sue Wimmer married Ruben Jackson Kidd on July 7, 1973 at Roanoke, Virginia.7 Lera Sue Wimmer and Ruben Jackson Kidd were divorced on September 23, 1982 at Franklin Co., Virginia.9 Lera Sue Wimmer died on July 27, 2011 at Shawsville, Montgomery Co., Virginia, at age 78.3,8,10 She Sue Kidd, 78, passed away July 27, 2011, at her home in Shawsville. She was the former Lera Sue Wimmer, daughter of Dennis O. and Rachel Beckner Wimmer, of Floyd. She was preceded in death by two brothers, Paul E. Wimmer and Dennis Earl Wimmer. She is survived by her daughter, Grace Kelley (James Wimmer) and son, Michael E. Kelley (Johnnie), stepdaughter, Kathy Brooks (Hawley) and stepson, Kerry Kidd (Diane). She is survived by six grandchildren and two stepgrandchildren, Randy Burdette, Travis Kelley, Robin Burdette DeIulio, Sandy Burdette Troy, Beth Burdette, Amanda Kelley, Kerri Kidd and Kevin Kidd; nine greatgrandchildren; her sister, Linda Clarkson (Wayne); and brother, Lane Wimmer (Lynda). At her request there will be no visitation nor funeral. She will be cremated and ashes scattered over a special place. At Sue's request, in lieu of flowers, please consider buying a coat or other type of clothing for a person in need, take a lonely person out to eat, or some other charitable act. Friends and family can join us at the Red Palace Chinese Restaurant, Valley View, at 6 p.m. on Friday or honor her memory at the Wimmer reunion on Saturday in Copper Hill. on July 29, 2011.3

M, b. March 9, 1911, d. February 2, 2001
His Social Security Number was 226-01-3002.13 Ivan Lee Roy Spangler was buried at Sherwood Burial Park, 1045 Lynchburg Turnpike, Salem, Roanoke Co., Virginia.1 He was born on March 9, 1911 at Floyd Co., Virginia.13,6,7 He married Ola Pearl Yates on April 11, 1940 at Roanoke, Virginia.12 Ivan Lee Roy Spangler married Marguerite Frances Warren on August 20, 1962 at Reidsville, Rockingham Co., North Carolina.11,5 Ivan Lee Roy Spangler died on February 2, 2001 at Roanoke, Virginia, at age 89.13,1,14 He SPANGLER, Lee Roy, 89, of Roanoke County, passed away Friday morning, February 2, 2001, following an extended illness. He was a member of Grandin Court Baptist Church, where he was a member of the Cridlin Men's Bible Class. He was preceded in death by his parents, John Harvey Spangler and Minnie Wimmer Spangler. He is survived by his wife of 38 years, Marguerite W. Spangler of Roanoke; step children, Linda Gibbons and her husband, Rodney of Ocean Pines, Berlin, Md; step son, Gary Grammer of Florida; step grandchildren, Shannon Grammer and his wife, Amy of Roanoke, Lorelei Holt and her husband, Randall of Callaway, Mrs. Tammy Crockett and her husband, Edward of Seaford, Del; one great-granddaughter, Kyndal Grammer of Roanoke; three sisters, Mrs. Beulah Spangler Claflin of Christiansburg, Mrs. Virginia Spangler Mills of Roanoke, Mrs. Mary Spangler Jamison and her husband, R. C. (Bob) Jamison of Boones Mill; a niece, Sandra Elaine Mills of Christiansburg; a nephew, Dennis Marco Mills of Catawba; and a first cousin, Mrs. Mabel Epperley. Funeral services will be conducted 2 p.m. Monday, February 5, 2001, at Oakey's South Chapel with the Rev. Carol Johnston and the Rev. Kevin Meadows officiating. Burial will follow in Sherwood Memorial Park. In lieu of flowers, the family suggests that donations be made to Good Samaritan Hospice, 3825 Electric Rd., Roanoke, Va. 24018. The family will receive friends Sunday from 2 to 4 and 7 to 9 p.m. at Oakey's South Chapel. on February 4, 2001.1

F, b. August 10, 1916, d. May 5, 2010
Inez Effie King married Homer Edward Foster, son of Elmer Cleveland Foster and Maude Hilda Jewell.4,8,9,1,2,10 Inez Effie King was buried at Restvale Cemetery, Rt. 221, Check, Floyd Co., Virginia.2,11 Her married name was Foster. She was born on August 10, 1916 at Locust Grove, Floyd Co., Virginia.4,8,3,11 She died on May 5, 2010 at Roanoke Co., Virginia, at age 93.2,11,3 She Inez Effie King Foster, 93, of Shawsville, Va., went to her Heavenly Home on Wednesday, May 5, 2010. She was preceded in death by her husband, Homer Edward Foster. She is survived by one son and daughter-in-law, Lyndel and Joyce Foster; two daughters and son-in-law, Shirley and E.G. Conner, and Connie Hall; four grandchildren and spouses, Brian and Traci Foster, Angela and James Epperly, Wayne and Angela Conner, and Kevin and Tonya Hall; six greatgrandchildren, Joe Foster, Matthew Epperly, Brooke Conner, Jonathan Conner, Cedric Hall and Breanna Hall; and several nieces and nephews. Funeral services will be held 11 a.m. on Friday, May 7, 2010, at Gardner Funeral Home Chapel with Pastor Thomas McCracken officiating. Interment will follow at Restvale Cemetery. Friends may call on Thursday, May 6, 2010, at Gardner Funeral Home where the family will be from 6 to 8 p.m. on May 6, 2010.2 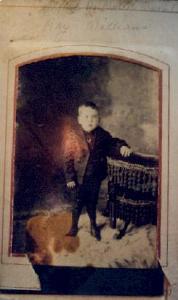 M, b. October 2, 1920, d. February 21, 2010
Roy Dennis Mitchem Sr. was buried at Mount Tabor Cemetery, Beckley, Raleigh Co., West Virginia.5,6 He was born on October 2, 1920 at Harper, Raleigh Co., West Virginia.5,6,7 He married Idleane Maggie Roop, daughter of George Frank Roop and Lonnie Annie Gearheart, on April 6, 1941 at Glen Daniel, Raleigh Co., West Virginia.1,2,3,4,6,8 Roy Dennis Mitchem Sr. died on February 21, 2010 at Beckley, Raleigh Co., West Virginia, at age 89.5,6 He HINTON - Roy Dennis Mitchem Sr. of Hinton passed away Sunday, February 21, 2010, at the Beckley Appalachian Regional Hospital following a short illness. He was 89 years of age. Roy was born October 2, 1920, to the late John E. and Garnet D. Mitchem of Paint Creek. In addition to his parents, he was preceded in death by his stepmother, Lorraine Mitchem; brothers, Denny Oscar, James Nelson, John Archie and Jack Mitchem, and a sister, Maxine Mitchem; a half brother, Randolph, and a stepbrother, Gene Mitchem, and stepsister, Virginia Lee Nelson. In addition to his family, Roy was preceded in death by his longtime friend, Gaylon Comer of Arizona. Roy began his career as a coal miner and later on as a truck driver. He retired as a dispatcher for E.I. Kane Movers of Maryland in 1982. He was a member of the Local Teamsters 639, located in Washington, D.C. Roy is survived by his loving wife of 68 years, Idleane Roop Mitchem. They were married on April 6, 1941, and had three children born into this marriage: Roy Dennis Mitchem Jr. and his wife, Jenny, of Hinton, Christine Marie "Chris" Sarver and her husband, Noah Lee, of Crab Orchard and Joseph Ray "Joe" Mitchem Sr. and his wife Sue of Fulton, Md. Roy was richly blessed by nine grandchildren to whom he was a loving Papa. Matthew Wright, Vicki Mitchem, Jackie Richmond, Deborah Wilson, Andrew Wright, Robyn Robertson, Dennis Mitchem, Joey Mitchem, and Katie Mitchem. He is also survived by two stepgrandchildren, Gary Sarver and Judy Richards, and twelve great-grandchildren. Roy is also survived by a brother, Troy Mitchem and his wife Jean, and sisters, Mildred Ann Malcolm and Sue Warden; several nieces and nephews, who affectionately called him "Uncle Roy." Roy and Idleane enjoyed traveling. They often took long trips to visit family and friends. An avid Washington Redskins and Cincinnati Reds fan, Roy stayed active and prided himself on being able to still drive anywhere he needed to go. He was a member of the Freedom Baptist Church at Powley's Creek. Funeral services will be 3 p.m. on Wednesday, February 24, at the Melton Mortuary Chapel with Pastor Pete Cook officiating. Burial will follow in the Mt. Tabor Cemetery. The family will receive friends from 1 p.m. until the service time. Grandsons will serve as pallbearers. The Mitchem family would like to thank the Summers County E.M.S. and the C.C.U. staff at Beckley Appalachian Regional Hospital for Roy's wonderful care and the compassionate words to the family during this difficult time. on February 22, 2010.6