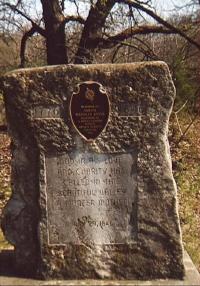 Sarah Handley Sarah Keyes was a member of the Donner Party, emigrating to California in 1846. She was the mother-in-law of one of the group's leaders, James Reed. Mrs. Keyes was seventy years of age and suffering from consumption when the group left Missouri in the Spring of '46. She insisted on going with her daughter & family and hoped to meet up with one of her sons, who had gone west a couple of years before. A special wagon was outfitted for Mrs. Keyes, designed to provide a comfortable ride for the elderly woman. When the wagon train reached the Big Blue River, in what is now northern Kansas, heavy rains had swollen the river & they had to wait for the waters to recede so they could cross. They named the campsite "Alcove Spring" and the men set about building a raft to ferry the wagons across. Mrs. Keyes died on the morning of May 29, with her daughter, Margaret, at her side. A cottonwood tree was felled & the trunks of it was split into planks to build a coffin. Her grave was dug a short distance from the camp, under a large oak tree. John Denton, a young Englishman traveling with the Donners, found a gray stone and carved her name and age to serve as her tombstone. Rev. Mr. Cornwall offered a prayer over her grave & hymns were sung by the entire company. The inscription on her stone read, "Mrs. Sarah Keyes, Died May 29, 1846, Aged 70." Mrs. Keyes' grave location is described as lying between Alcove Springs and Independence crossing, about one quarter mile from each. It is located on a sloping hill, on the north side of Alcove Springs Creek. The stone was still standing in 1930, but none of the engravings remained.2 She was buried at Sarah Handley Keyes Burial Site, Alcove Spring, Marshall Co., Kansas.2 She was born in 1776 at Virginia.2 As of 1803,her married name was Keyes.1 She married Humphrey Keyes in 1803.1 Sarah Handley died on May 29, 1846 at Manhattan, Riley Co., Kansas.1,2